A trade, and it didn't even smell like a shoe!!

As I navigate between writing and reading about baseball cards, and add in sorting!! I found a guy who lived relatively close to me by the name of Shane at Shoebox Legends  What stood out was he was the last of a dying breed, a Hartford Whalers fan!   The long exiled team from Insurance City had long been a thorn in the side of Bruin fans for a long, long time.  Ron Francis and Kevin Dineen were never liked up here because of the damage they could do on the ice, but guys like "The Little Ball of Hate" Pat Vebeek (or VerGeek as we called him) and public enemy number 1, Ulf Samuelsson were two others that were despised by Bs fans.  On the other side, Hartford fans hated when Bs fans would flood their home arena to cheer on the Bruins!  Now it seems, Shane is a Bruins fan as well, whether that is lack of options or he finally decided to come over to the Black and Gold side it makes for a interesting mix.  A while back, I bought a collection that had a LOT of hockey cards in it, and I am not a hockey card guy.  This presented me a chance to set up a trade and put some cards that would sit in a box, with a collector that would enjoy them.  ( You can see his end of the deal here)  It also gave me the opportunity to add some Heritage, Archives and All-Time Fan Favorite cards to the collection as I decided to go back and put these sets together after years of not bothering with them.   I received a bubble mailer from Shane and it was stuffed with vintage inspired goodness that he dug out of his shoebox.  This is just a sample of the cards I received. 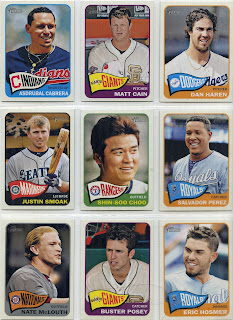 Men without Hats!  It is amazing how many of the 2014 Heritage had the players pose without their hats.  It certainly was common practice back in the 60s, but it became a lost art years later, so I can see the modern baseball player probably a little weirded out when a photographer clicking aways starts to ask them to doff their cap.   It looks like Shin Soo Choo must have gotten the memo that hatless photos were being taken as he made sure he had his hair styled and blow dried.  On the opposite side, Nate McLouth looks like he has perpetual "helmet head." 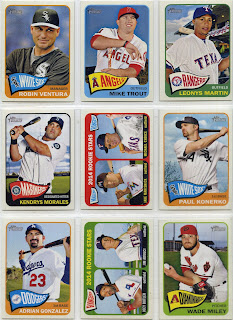 It makes me feel old that not only do I remember when a current manager was not only a player, and not only their rookie season, but remembering them when they played college ball.  That is the case with Robin Ventura whom was a stand out with Oklahoma State back in the mid 80s.  Loved adding a premier player like Mike Trout to the 2014 pile.  Leonys martin is such an enigma, he has great tools but hasn't seemed to have the chance to put it all together.  Hopefully he gets a fresh breath of life in Seattle.  Two cards that just echo the feel of those 60s vintage posed shots: Kendry Morales and Paul Konerko.  Kendry is a great shot with a great background of the sky and the posed home run swing like something out of The Actor's Studio.  Konerko is about to play his final season of a great career.  This pose  and angle of shot gives a bit of majesty to the Shane's fellow statesman.
Love the dual rookie cards.  Marisnick has found a nice little home in Houston, while highly regarded Michael Choice has seemed to flame out in Texas.  Then a former and future former Red Sox.  Adrian Gonzalez never found his groove in Boston and was packaged with high priced Carl Crawford, and malcontent Josh Beckett and shipped to the Dodgers in one of the greatest dump deals ever. Nick Punto drove everyone to Dodgertown too.  Wade Miley  was seemingly coming into his own when the Red Sox peddled off two of the key prospects they netted in the Dodger deal to acquire Miley.  His one season in Boston was up and down but he ended up about right where he was the prior two years.  During the offseason, Boston, having a wealth of starters dealt Miley to Seattle for the underrated Carson Smith. 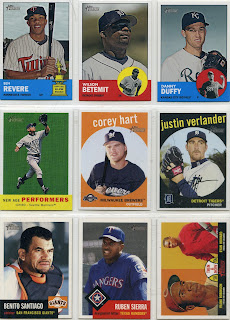 Shane sent over a few from past years that are certainly needed and appreciated.  The 2012 homage to the 1963 set is a nice clean set.  It is fun to see the old "Topps Rookie" trophy in its mega size on the Revere card. Danny Duffy looks less than thrilled with a bad fake smile.  The 2009 Heritage (1959) is a nice lesson in primary colors, and a bad one in capitalization.  Corey Hart was a solid player that I felt never got to fully blossom due to chronic injuries.  Verlander, after the Kate Upton photo leak, I can never look at this guy the same way. (Once you see it, you can't unsee it!)  The Frank Robinson comparison to Ryan Howard looks silly now, but back when this came out, the trajectories were similar.  Ruben Sierra was a fantastic player when he debuted.  He was a lean  5 tool player, but he bulked up to the point he was so muscular he could not quite turn on pitches as quickly as he once did, and faded into journeyman status, but did play for quite a long career.  Same can be said for Benny Santiago.  This card of Santiago reminded me of Johnny Damn.  or if Hollywood ever wanted to make a movie called "The Benito Santiago Story" the perfect guy to play him in his later years is Luis Guzman. 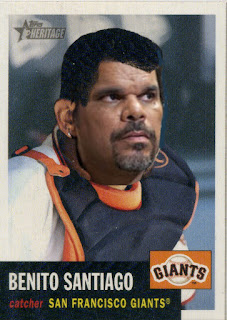 To wrap it up, here are some Archives 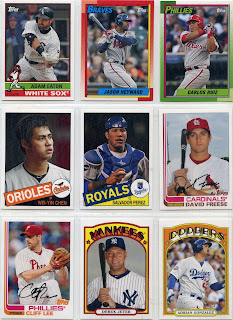 The Adam Eaton card looks off due to the White Sox changing their color scheme.  Back in 1976, the red was part of the WHite Sox uniforms.  Jay Hey looks right at home in a 1990 style card  ready to team with a pair of young Jones boys for a great run.  Wei Yin looks way pissed that his hatless hot was not used for a Heritage set, but stuck on a 1985 inspired card.  Sal Perez has really blossomed in KC and is a huge part of that teams current run of dominance.  I really liked the 1982 design, and it is great to see current players and their facsimile signatures done in this style.  Topp it off with the beloved 1972 style card. (Anyone else looking forward to 2021 Heritage??!)  Love getting one of baseball's great modern legends in Derek Jeter.  Design wise, A-Gone closes out this post with an exit stage right.
Thank you Shane, I appreciate your generosity.  I have another package set aside for you.